The other Friday I was in Bethlehem, staying in the EAPPI apartment. It’s very near the separation barrier that Israel has built, separating it from Jerusalem. In Bethlehem the barrier is a 25-foot high concrete wall, over four times my height! The barrier is mostly not built on the border between Israel and the occupied Palestinian territory, but on and in Palestinian land. In 2004 the International Court of Justice issued an advisory opinion that the route of the separation barrier was illegal, that Israel should re-route the barrier along the so-called Green Line, the 1949 Armistice line between Israel and the occupied West Bank, and that it should compensate Palestinians who have suffered loss as a result of the barrier’s construction. 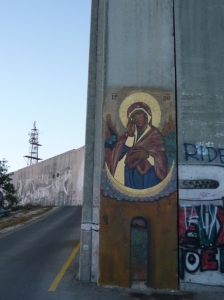 Just up the street from our Bethlehem apartment there’s an opening in the barrier that coachloads of international visitors can pass through with minimal checks; it’s known as the car checkpoint. Nearby there is a huge hangar-like building. Any Palestinian wanting to go to Jerusalem needs a special permit; with this s/he can go through the lengthy process of ID and permit checks, and physical checks.

In the late afternoon each Friday a small group walks along part of the Bethlehem side of the barrier, praying. On my visit to Bethlehem I joined nuns from a convent right beside the barrier, a local priest, two EAPPI colleagues, some Italian visitors, and Clemence.

Clemence lives in the last house before the barrier. The car checkpoint and part of the barrier are built on her land. The initial plan for the barrier’s construction would have separated the convent from Bethlehem. As Christians, Clemence and her husband (now dead) felt this was not right. She told me that her husband appealed to the Israeli authorities, offering to allow them to take more of his land than in the original plan, as long as the convent remained accessible to the people of Bethlehem and visitors to the city. The Israeli authorities agreed, though they actually took twice as much as Clemence’s husband had offered. The construction of the separation barrier on their land and just a few yards from their home was very difficult for Clemence and her family; she thinks the stress of it all was a factor in her husband’s subsequent fatal heart attack.

The car checkpoint is the route by which coachloads of pilgrims enter and leave Bethlehem. Clemence is not allowed to go through the car checkpoint to her family’s land. She said that it’s hard to watch others do so freely, though the olive groves have given way to a concrete wasteland.

Her family had many olive trees there, producing enough olives and oil for their own use and to sell. Since the barrier’s construction they have had to buy their supplies. She told me that the first time they sat down to a meal with bought olives and oil they wept as they said grace.

Apparently, the majority of pilgrims who visit Bethlehem spend no more than 45 minutes in the city: they have a look inside the Church of the Nativity, maybe spend a few minutes in a specially chosen olive wood shop, and then it’s back onto the bus and off up the road to Jerusalem, sweeping through the car checkpoint. 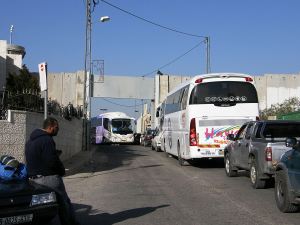 Dr Ian Bradley, author of Pilgrimage: A Spiritual and Cultural Journey, sees an essential aspect of approaching pilgrimage as being open and vulnerable to change. In the Holy Land, meeting the local people and seeing the situation first hand certainly require an openness and vulnerability; and those who experience that kind of pilgrimage generally find it a transformative experience.

The staff of the World Mission Council are an excellent source of advice, suggestions, information and contacts for those planning a pilgrimage to Israel and the occupied Palestinian territory. In May Rev Clarence Musgrave, formerly Minister of St Andrew’s Church, Jerusalem, is leading a tour; the programme is an excellent balance between visiting holy sites and meeting the living stones, check it out.

If you do go to Bethlehem, as you’re leaving the city through the car checkpoint, look to your right to see Clemence’s house and the road to the convent. And, if it’s a Friday around 6pm (or 5.30pm in winter), look out for Clemence walking and praying with the nuns. She’s sure to be there, keeping the faith. And, for those of us lucky enough to meet her, giving new life to our faith too.

I work for Quaker Peace and Social Witness (QPSW) as an ecumenical accompanier serving on the World Council of Churches’ Ecumenical Accompaniment Programme in Palestine and Israel (EAPPI). The views contained in this article are personal and do not necessarily reflect those of my employer (QPSW) or the World Council of Churches. If you would like to publish the information contained here (including posting it on a website), or distribute it further, please first contact the QPSW Programme Manager for I-oPt teresap@quaker.org.uk for permission. Thank you.