Maureen Jack is a member of the World Mission Council who has a particular interest in the Middle East. Here she writes about a recent visit to Palestine and Israel.

In March I went with Kate McDonald, our Minister in Tiberias, to visit House of Grace in Haifa. Here, we met Jamal Shehadeh, a Melkite Christian who now runs the project. The project is housed on the site of a beautifully restored church (see photo below) that Jamal’s family rebuilt from a shell.  New high buildings are being built just a few feet away from the church and the House of Grace buildings. It felt to me as if we were being imprisoned as we stood in their small grounds. 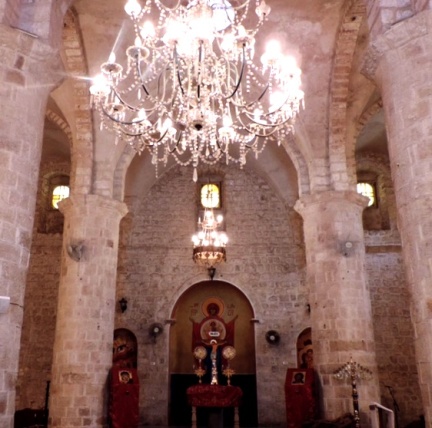 Perhaps that sense came to me because I was aware of what the House of Grace family do.  Not only have they rebuilt a church, but their work, their ministry, is rebuilding the lives of prisoners on parole.

Non-Jews form 20% of Israel’s population, and 45% of the prison population. Despite such statistics, House of Grace is the only half-way house working with prisoners on parole who are not Jewish. Work with Muslims, Christians and Jews used to take place, but in 2011 the Israeli Rehabilitation Authority required it to work only with Muslims and Christians. Staff and volunteers at House of Grace do however include Muslims, Christians and Jews.

House of Grace can work with 15 released prisoners at any one time. They usually have a waiting list of between 10 and 16 men who have been granted parole, but are waiting in prison for a place.  The arrangement is that the men spend nine months living in House, and then a further twelve months living in the community whilst maintaining contact with House of Grace.  Most of the men interacting with the project have had a drug problem. Their work is very successful, and reoffending rates are lower than other facilities in Israel.

The project also provides job opportunities for men who have been sentenced to community service, as well as evening activities for children in an effort to raise awareness and prevent crimes from being committed in the first place.  Initially, this work was focussed on children who were seen as at risk of becoming involved in crime, but Jamal found that the children were self-conscious about coming and didn’t want their friends to find out. Instead, their children’s programme is now open to all youngsters in the community. 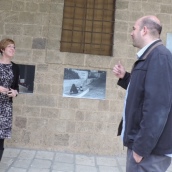 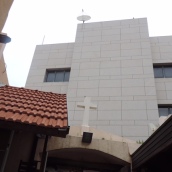 Another part of their ministry is the distribution of food to local families in need (see supplies stacked in church in photo on the right) around the time of their own religious holidays.  Jamal spoke of how encouraging it is when a family will thank them for the offer of food, but say that they no longer need this assistance.  The project cooperates with the welfare department, schools, churches, Scouts, and other community groups in their various programmes.

The work that Jamal and his family do is inspiring.  Jamal spoke of the benefits the men gain from being in a family community, playing with the young children in the family, and having the support of his mother (who was visiting a prison that morning); the regard in which his mother is held was obvious from the wonderful array of Mother’s Day flowers that seemed to be everywhere we looked!

The reputation that House of Grace has gained is impressive. It became vital when the authorities were proposing to cut their government grant.  This would have made their work difficult, if not impossible, to sustain.  As a partner, the Church of Scotland did what it could, through Kenny Roger, Middle East Secretary, to lobby on their behalf.  But, local support was more important.  At an emergency press conference held in the church Jamal was moved to see that sitting together were parliament members, a rabbi, a bishop, a monk and a sheikh. “I couldn’t help my tears” he said.  The funding was reinstated.

Most inspiring of all is listening to Jamal speak about the motivation and strength he gains through his faith.  For him, to be among people and able to help brings him joy.  He spoke of the Shehadeh family being used as a tool to show God’s grace.  For him, being chosen to do God’s work is a source of great joy.

It is a real joy for the Church of Scotland to be a partner of House of Grace.  To visit the project and listen to Jamal is a tremendous privilege.  I would encourage anyone who wishes to enrich their own faith to make contact through World Mission and arrange to visit.