Carol Finlay, Twinning & Local Development Secretary, World Mission Council, Church of Scotland  shares a snapshot of the work of  Ekwendeni Hospital AIDS Programme; one of 22 projects in 16 different countries supported by the Church of Scotland HIV Programme. The programme is able to give grants to partner churches and organisations because of the generous gifts from congregations in Scotland and beyond. To date nearly 1.5 million pounds has been raised.

A knock at the door and a quiet but assured ‘odi’ (the ChiTumbuka word used to signal someone is around) was my first time of meeting Gogo Victoria Mhango. I was actually a ‘fly on the wall’, so to speak, as I was just sitting chatting to the staff of Ekwendeni Hospital AIDS Programme in the Synod of Livingstonia, Northern Malawi. Victoria knew of the Programme as she had benefited from agricultural inputs when she had been struggling to feed her grandchildren some years back.

This time, she had brought with her the eldest of her two grandsons, Clement, a young man of 20 years old. She had been caring for Clement and his brother since 2003 after their father died and they were left orphaned. Up until now she has been able to clothe and feed the children and also to pay school fees for them by growing vegetables in her garden and selling them. However this year, which happens to be a very important year for Clement – his last year at Secondary School, she is unable to raise enough money. Clement has been sent home from school and told he cannot return until the fees are paid.

Clement attends a Community Day Secondary School where the fees are equivalent to £15 a term. He is doing well in school and is constantly towards the top of his class. He hopes to be able to go onto tertiary education and wants to be a lawyer. Gogo Mhango says he works hard at school and at home, helping her with the chores and he is ‘a good boy’, well behaved and well mannered.

She, herself is a strong and determined lady. I could see that by the look on her face, and the way she calmly told her story to Esther Lupafya, Co-ordinator of the Programme, and Webster Moyo who does the day to day work with student education. After speaking with the Head Teacher, convinced by his ability, they take on the responsibility of Clement’s fees for the rest of the year. 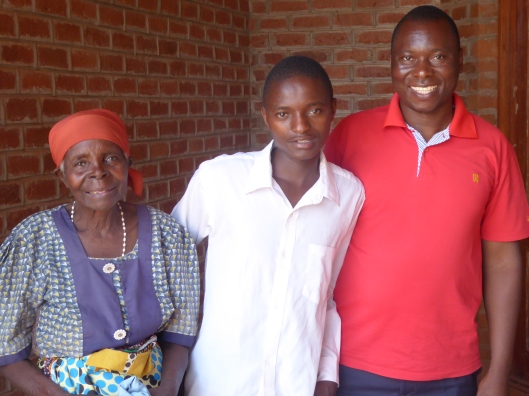 Gogo Mhango’s walk to the hospital today has been worthwhile, she graciously thanks Webster and Esther as she and Clement leave with smiles on their face and a spring in their step. Her dream of being supported in her old age by her grandson remains intact.

Ekwendeni Hospital AIDS Programme is supported by the Church of Scotland HIV Programme and our grant goes towards supporting orphans and vulnerable children.